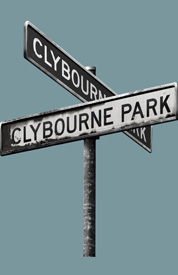 Here is the official information for Clybourne Park on Broadway:

In Clybourne Park, which also won the Olivier Award for Best New Play, Norris imagines the history of one of the more important houses in literary history, both before and after it becomes a focal point in Lorraine Hansberry’s classic “A Raisin in the Sun.” In 1959, the house, which is located in a white neighborhood at 406 Clybourne St. in Chicago, is sold to an African-American family (the Younger family in “A Raisin in the Sun”). Then in 2009 after the neighborhood has changed into an African-American community, the house is sold to a white couple. It is through this prism of property ownership that Norris’ lacerating sense of humor dissects race relations and middle class hypocrisies in America.

To read reviews of Clybourne Park on Broadway, click the link below:

To buy tickets to Clybourne Park on Broadway click the link below: