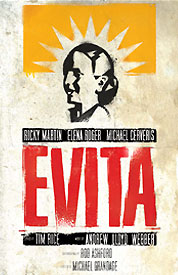 Here is the official information for Evita on Broadway:

Eva Perón used her beauty and charisma to rise meteorically from the slums of Argentina to the presidential mansion as First Lady. She won international acclaim and adoration from her own people as a champion of the poor, while glamour, power and greed made her the world’s first major political celebrity.

Evita tells Eva’s passionate and tragic story through Tim Rice and Andrew Lloyd Webber’s most dazzling and beloved score, which includes “Don’t Cry for Me Argentina,” “Another Suitcase in Another Hall” and “High Flying Adored,” together with “You Must Love Me,” the Oscar-winning hit from the film Evita.

To read reviews of Evita on Broadway, click the link below:

To buy tickets to Evita on Broadway click the link below: